Let’s start 2020 off with a bang – our *free* DLC Wargroove: Double Trouble will be ransacking digital stores on February 6th on PC, Nintendo Switch and Xbox One! The PS4 version will be on the way, date to be revealed soon.

Just like the main release, it will be playable in 11 languages and you can wishlist it right now on Steam.

Take a look below at our brand new Wargroove: Double Trouble trailer created by our super talented Technical Designer Armagon.

Development on Wargroove: Double Trouble actually started before the release of the base game. Work kicked off in the period between the end of Wargroove’s core development and the game’s release when Wargroove was going through localization, testing, and platform submissions. We knew that we wanted to expand upon Wargroove’s story and create some new characters, but a real focal point for us was the local co-op gameplay element. As a studio we always really enjoyed playing Wargroove together, so creating a shorter campaign that could be played couch co-op felt like a no-brainer.

Another element set from the beginning was the idea of a 2-in-1 Commander, which we felt was not only unique but also fit the theme really well. Here’s a concept animation sheet showing how we looked at the ways the twins’ actions would work together. It’s pretty cool to see a breakdown of how Errol’s amulet also comes into play, igniting dynamite for Orla’s slingshot attack and generating a protective shield when defending!

Can’t remember what else is in the DLC? Here’s a quick recap!

Before we go, we’ll leave you with some awesome concept art of Wulfar and ideas for the Thief unit design.

While we’re all waiting patiently for more Double Trouble release news I thought I’d give you a little more insight into everyone’s favourite malefactor – the outlaw’s outlaw (by which I mean the Outlaws outlawed her), it’s Vesper!

This bitter and hateful villain is the main antagonist in our brand new co-op story campaign. While Vesper (unlike Sigrid before her) falls short of regicide, she does go in for a little bit of light kidnapping and some advanced level extortion. Her machinations lead the bereft Wulfar, Errol and Orla with a hefty ransom to pay, leading to their daring heists upon the Imperial Palace of Heavensong, The Stone Mountain Fort of Felheim, The Celandine Vault of Cherrystone and the Floran’s Iron Root reserves… That’s all the gold in Aurania!

Anyway, Vesper really wouldn’t approve of me talking about anyone else but her, so lets get back to our ‘leading lady’. Vesper was developed after the other Double Trouble characters had been established, so we knew exactly what gap she needed to fill. As Wulfar’s foil Vesper had to be decidedly dramatic and theatrical, the better to counter the grounded chieftain’s reasonable personality.

Throughout the visual concept stage we looked at circus ring masters and joker card style clowns as inspiration. Likewise, when it came to voice casting, we searched for something striking. After exploring a few options, we settled gleefully on a Cruella De Vil-esque voice (because if dalmation desecration isn’t arch-villain territory I don’t know what is). 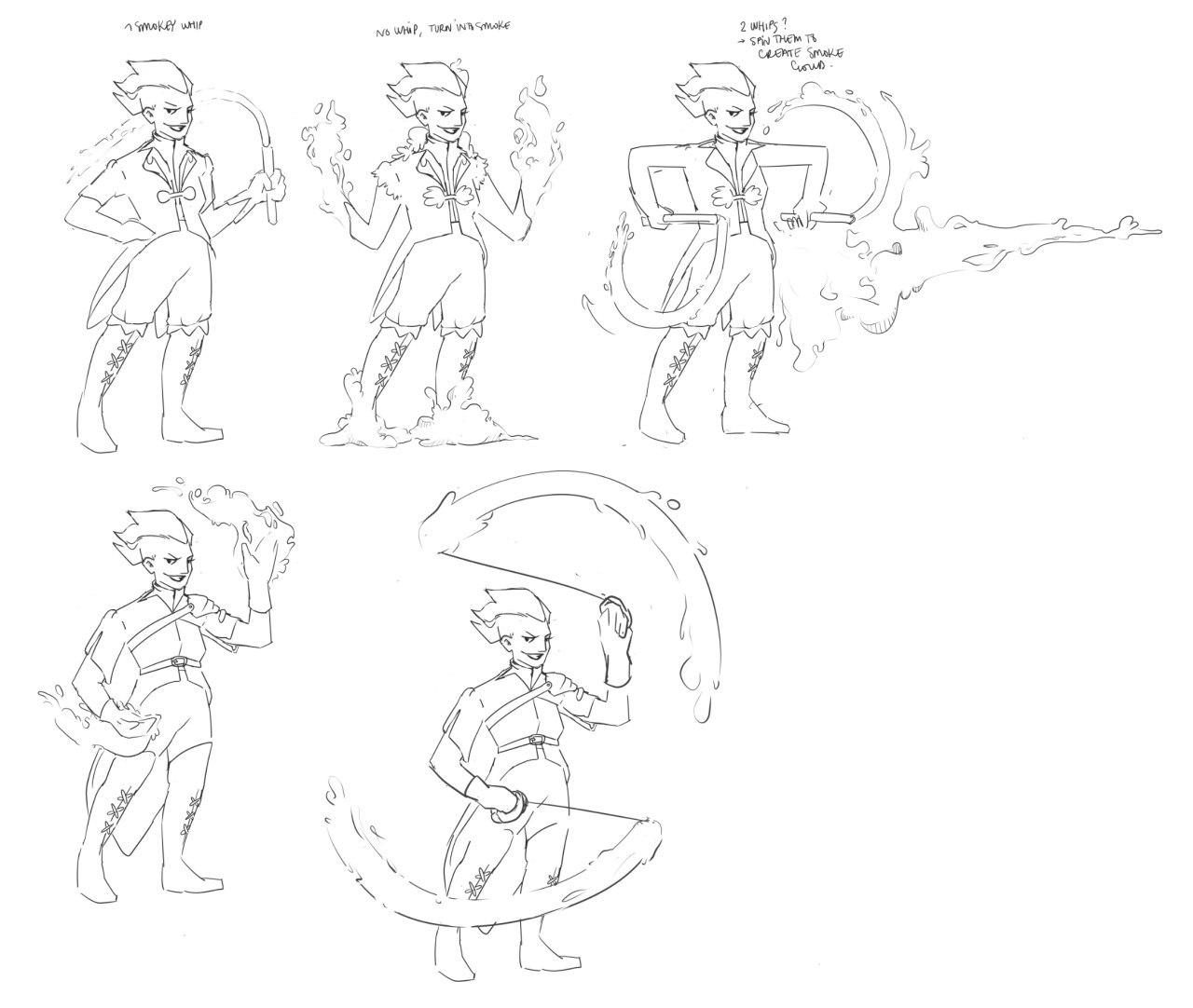 Vesper’s signature weapon followed pretty naturally from her early visual development. Where there are ringmasters there are whips! We felt this suited Vesper down to the ground because, ultimately, there aren’t a lot of weapons that are more theatrical than a big ol’ whip. 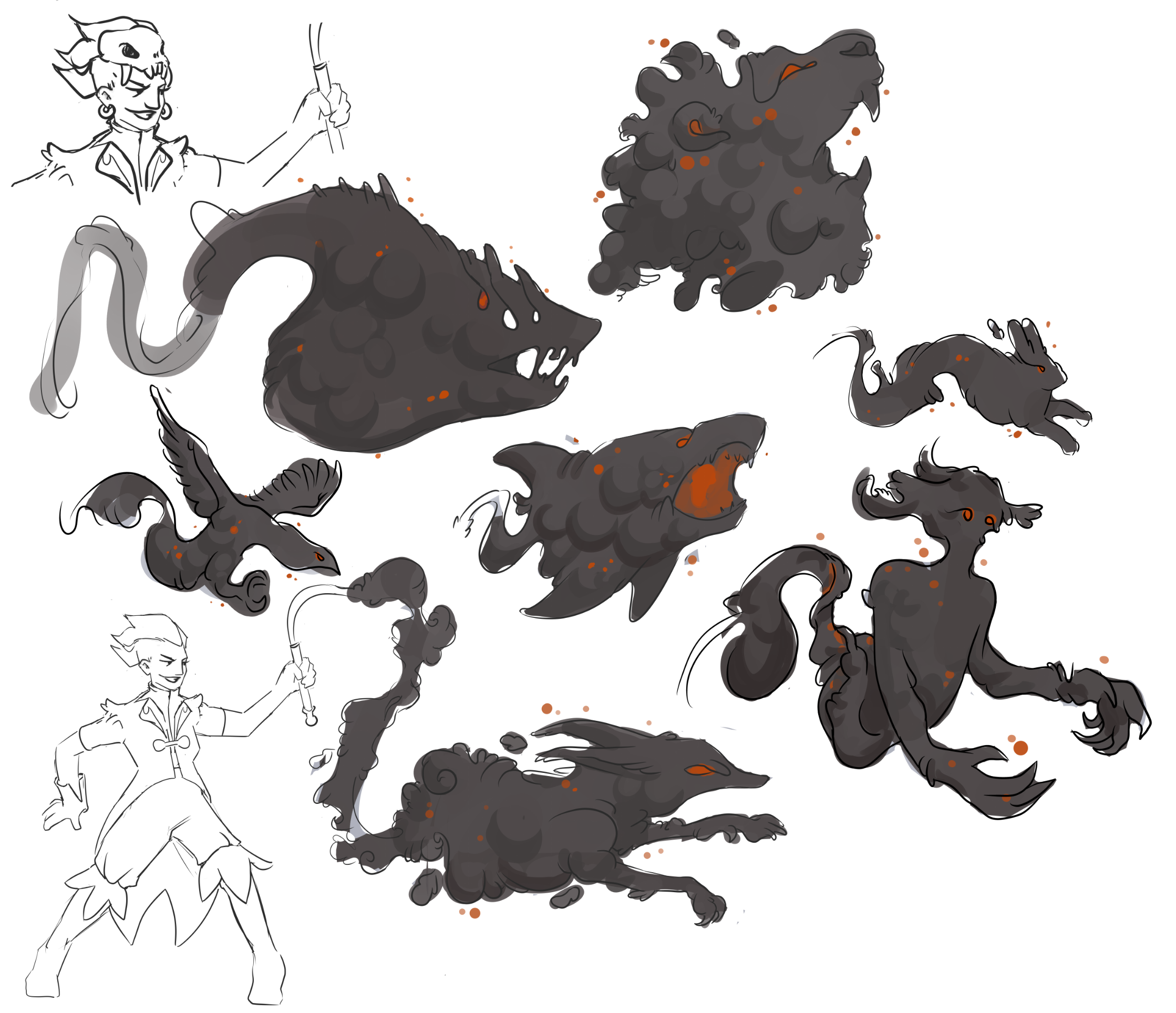 Fumomancy was a big influence when it came to choosing a name for Vesper. Because of this special kind of magic we based our search around the themes of smoke and darkness. Not only does the name Vesper mean ‘evening’ (so evoking the gathering of darkness), but it also has a smokey assonance that we felt really suited the character.

That’s Vesper! In a nutshell.

G’day folks, it’s been a while!

When we set about starting work on Wargroove: Double Trouble, we realised new Commanders would be a must, and new Commanders would need new music. Bringing Phonetic Hero back into the fold was the obvious decision; especially since he had done such an excellent job on the original soundtrack.

As the Double Trouble campaign centers on the Outlaws and performing heists, Phonetic Hero initially sought to tap into a similar energy to that of the Outlaw’s original track, “Cheeky Ruckus“. Eventually we steered the commanders’ tracks in a slightly different direction, but we thought this first effort was too good to not use, so now it serves as something of a main theme for Double Trouble, featuring during the planning phase of every mission in the campaign. It is my pleasure to present the finished track, “The Plan”, right here!

This song, and all the others we’re adding with Double Trouble will be available for purchase shortly after the DLC launches. Phonetic Hero has continued to bring us really varied and high quality tracks, so I’m looking forward to sharing more of them with you guys soon! In the meantime you could always listen to the full original soundtrack over on our YouTube channel, or it’s also available for purchase so you can listen to it whenever you like! 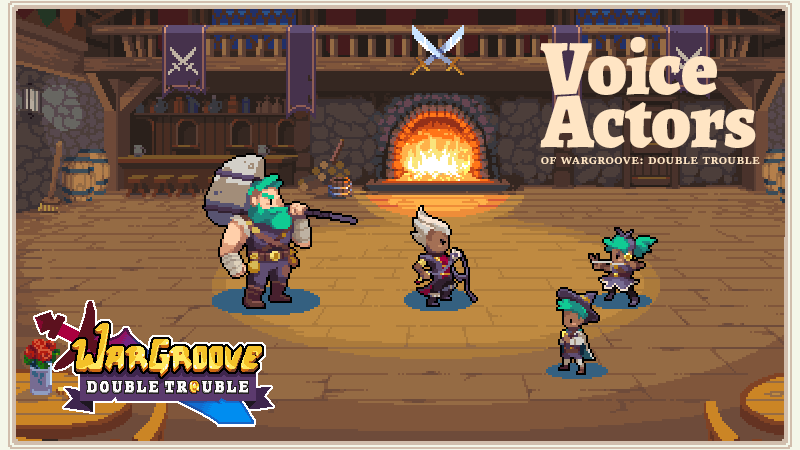 I hope you’re all suitably excited for the upcoming *free* DLC, Wargroove: Double Trouble! We’re getting closer to the stage of being able to announce a release date, but in the meanwhile let’s get you better acquainted with the voice talent behind Double Trouble’s new Commanders. You’ll soon be hearing their fantastic taunts and warcries on the battleground. If you want a reminder of the original Wargroove voice cast, you can find out more in our previous Role Call blog.

Adrian Vaughan as Wulfar
Adrian has lent his voice to a rag-tag collection of characters in video games such as Crawl, Armello, Paradigm, Budget Cuts 1 & 2, and the upcoming adventure titles Harold Halibut and The Drifter. He’s also appeared in a handful of award-winning competition titles he’s quietly proud of, plus some radio/TV commercials. When he’s not doing his best to be all kinds of sinister or gruff, Adrian spends his time writing bios in the third person – ’cause nobody else will.
Website – Twitter – YouTube

You can find out more about Wulfar in this Character Spotlight.

Eileen Montgomery as Errol
Eileen “EileMonty” Montgomery is a voice actress, singer and YouTube entertainer from the UK. Some of her most well-known roles include Mustache Girl & Queen Vanessa in A Hat In Time, Winter in Regalia: Of Men And Monarchs, Nikki in Sprint Vector, Lady Tethys in Dust: An Elysian Tail, Lady Shera in Love Esquire, Boo Qi & Black Widow in Hauntsters and Nereid, Potion Merchant & Additional Voices in Apotheon.
IMDB – Twitter – YouTube

You can find out more about Errol in this Character Spotlight.

Vivien Taylor as Orla
Vivien Taylor is a Scottish voice, screen and theatre actress based in the UK. Orla is Vivien’s first video game credit but she has voiced many female characters in CBBC’s BAFTA- winning television animation series, OOglies Funsize. She has also appeared in movies such as Outpost: Black Sun and Outpost: Rise of the Spetsnaz, as well as acting and voicing commercials. Vivien has narrated audiobooks, playing Lavinia Whateley in the world’s first audio movie, HP Lovecraft’s The Dunwich Horror, which was awarded ‘Best of the Fest’ at the Edinburgh International Film Festival.
Website – Twitter – IMDB

You can find out more about Orla in this Character Spotlight.

Jessica Straus as Vesper
Jessica Straus enjoys a diverse career in voice-over and is honored to be on over 100+ games.  Although she has fans for many of her gaming roles, she is currently best known as Juri Han in the Street Fighter series, Amazon/Cassia in Heroes of the Storm & Diablo II (along with many other Blizzard roles), Dr. Hypatia in Dishonored 2, and many Japanese RPGs including Pi in .hack//GU, to name a few.
Website – Twitter – Instagram

You can find out more about Vesper in this Character Spotlight. 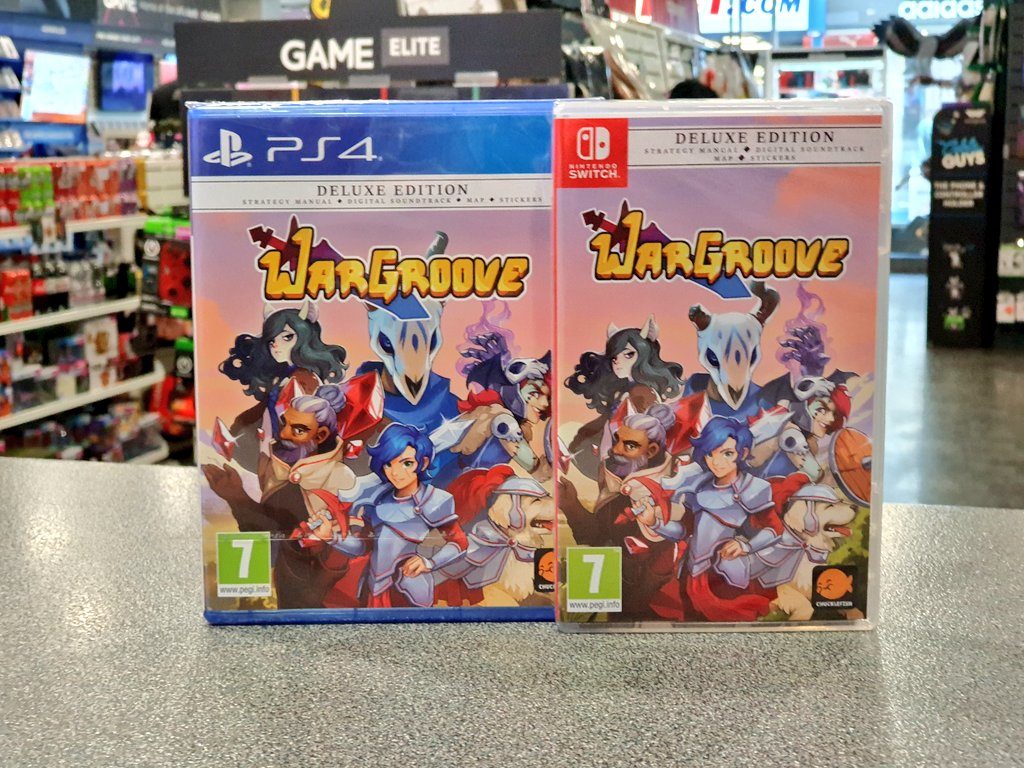 That’s it for now. Don’t forget that Wargroove’s Deluxe Edition physical copy is now available to order online or pick up in good ol’ brick and mortar stores for Nintendo Switch and PlayStation 4. You can also follow updates about Wargroove: Double Trouble and Wargroove in general on Twitter, Facebook, our forums, the Wargroove subreddit, and the wiki!

Hey everyone, we’re back!

We had an amazing week at EGX showing off Wargroove: Double Trouble to the public for the very first time. Along the way we gathered some feedback, got to meet some amazing members of our community and genuinely had a brilliant experience sharing what’s in store for the DLC. 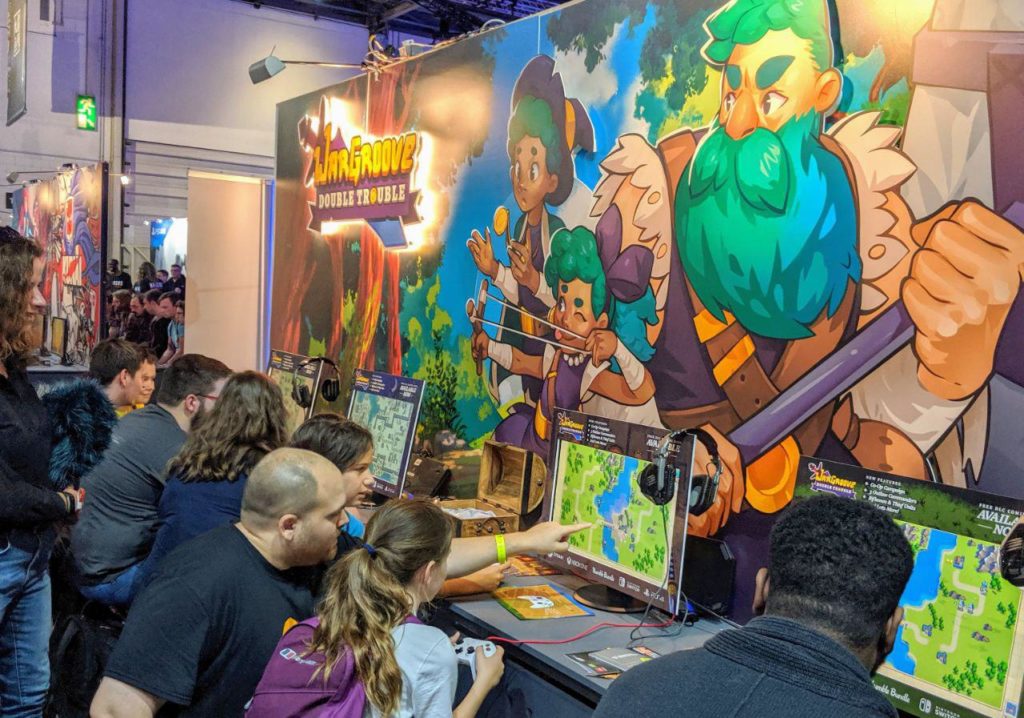 The Deluxe Edition includes a load of free goodies, such as a downloadable version of the Wargroove soundtrack by Phonetic Hero and Boss Battle Records, a Commander sprite sticker sheet, a poster map of Aurania (Outlaw version!), a mini strategy manual with stats and tips on all units (available in English, French, Italian, German & Spanish) as well as a reversible coversheet! 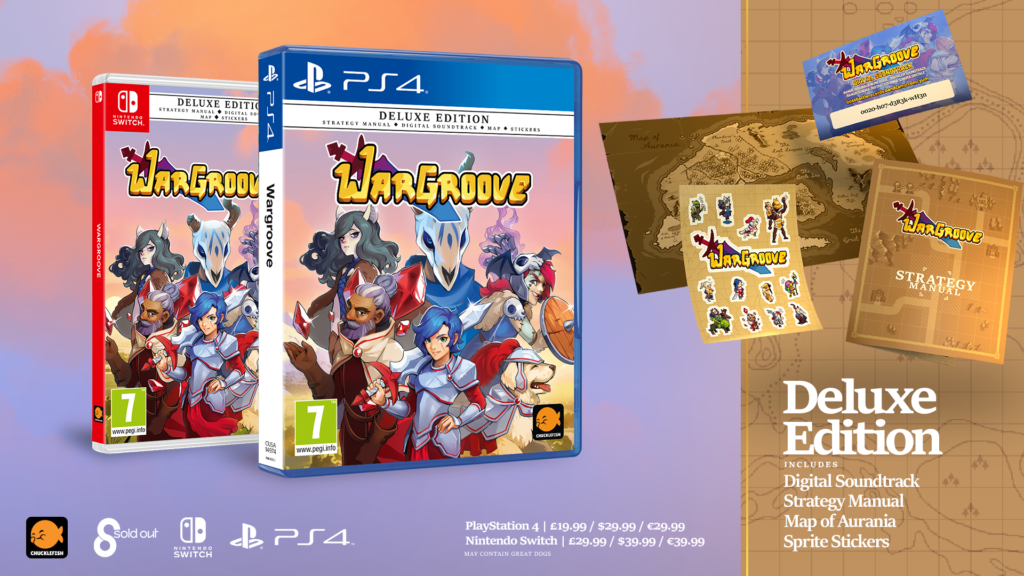 This will be our very first in-house game to get physical release and wouldn’t have happened without the amazing support we received for the game’s digital launch, so thank you from all the team here for getting us to this amazing milestone.

But enough about that – let’s get into the Commander Spotlight!

As you may have seen earlier this month, we revealed more info on what’s coming with the free Double Trouble DLC, including the new Outlaw Commander, Vesper! 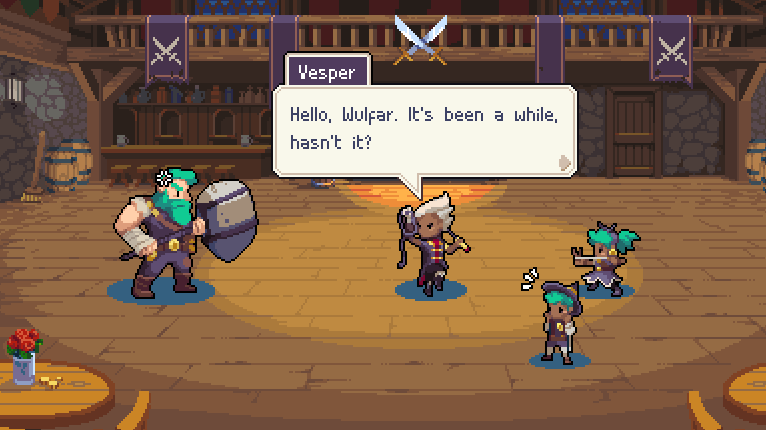 Sly, deceitful and abrasive, Vesper certainly makes an impression – this notorious criminal is capable of conjuring a demonic smoke beast with just a whip and a flourish. A real bête noire, n’est-ce pas?

Vesper is the main antagonist in our brand new co-op story campaign. Fresh from kidnapping someone close to Wulfar and the twins, Vesper demands a hefty ransom for their return. Wulfar, Errol and Orla must raid the Imperial Palace of Heavensong, The Stone Mountain Fort of Felheim, The Celandine Vault of Cherrystone and the Floran’s Iron Root reserves… It’s a heist, for all the gold in Aurania!

Vesper’s groove ‘Smoke Shroud’ sees her shrouding an area of the map in thick, magical smoke. Units within this area cannot be targeted or counter-attacked for one turn.

Vesper’s Smoke Shroud has a slow charge speed, but is immensely powerful if placed correctly. When using it in the thick of battle, players should seek to gain an additional first attack advantage.

That’s all we have to share for now, we will be streaming a first look at Double Trouble’s map editor on Wednesday via the ChucklefishLive Twitch channel, so make sure to follow us there for a notification when we go live. You can also follow updates about Wargroove: Double Trouble and Wargroove in general on Twitter, our forums, the Wargroove subreddit, and the wiki!