The Heavensong Empire is region of culture and beauty, guarded by a diligent army of masked warriors. In a land beset by shambling skeletons and monstrous plant people, there are few leaders as determined to protect their people as the Empress Tenri. 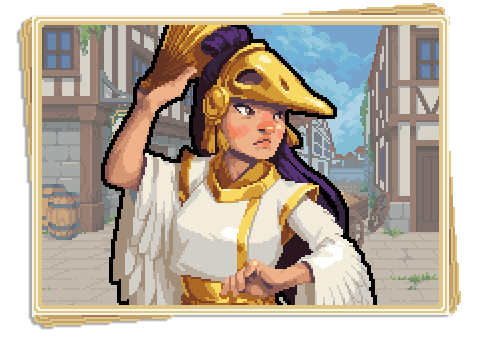 In the wake of King Mercival II’s death she has lost an ally, and is now more determined than ever to protect her people from the rising threats throughout the land. Often described as coldly professional in public appearances, she has a softer side when it comes to those closest to her – particularly her young inventor son. She harbours a particular hatred for the Felheim Legion, for as a child she witnessed her mother’s death at the hands of its previous leader.

In battle, Tenri attacks with a dizzying strike from her fans. It would be wise to not make an enemy of her…

Keen-eyed followers will notice that an earlier version of Tenri appeared in our announcement trailer with a different name. We felt this name fit her better!