G’day everybody!
In my first post I mentioned that I’d like to share a bit of what I was working on, so I thought I could touch upon that today. Wargroove is coming along at a great pace, and it’s been a real privilege to be taking part in its development. Initially I came on board to help with some sound work, but I’ve since gotten to take a big role in the game’s map design too, utilising the incredibly robust editor that Rodrigo has put together.

It’s been an interesting challenge, changing up my design process from my dungeon work on Starbound. It’s easy to underestimate how much of a difference could be made to the balance of a given mission, just by tweaking a few small things. For instance, one faction starting with just one or two more units, even the weakest ones, can easily determine whether a player easily trounces the AI, or if they end up in a fierce struggle where any mistake can cost them dearly. Discovering all of these variables as tools of design has been a lot of fun, and I’ve been putting them to careful use to achieve my desired results. 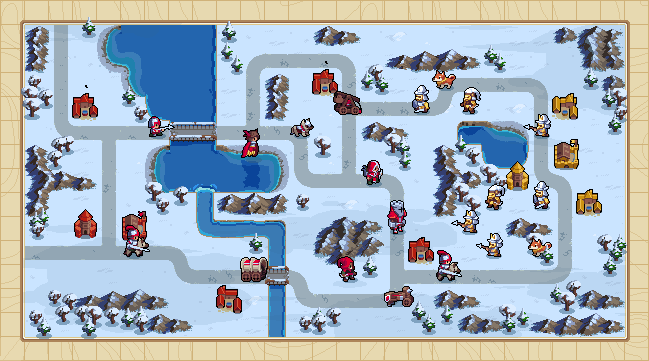 As far as my sound work, the process has ended up being quite similar to my time working on Starbound. If I’m lucky, getting something to sound right is easy. In the vast majority of cases it’s not. That said, when I wrap up one of the tougher sound tasks and end up with a satisfying result, it’s one of the best feelings! Here’s a quick taste of the Ballista attacking a Balloon unit, which you may remember from their reveal last year.

I hope you enjoyed this glimpse into my own efforts as a member of the Wargroove team. Have a good one folks!