Building a campaign for trouble, and making it double!

Those of who you follow this blog probably know me as “that guy who sometimes posts music spotlights”. For those not in the know, I’m the Wargroove team’s sound designer and lead level designer, responsible for creating the missions that made up the original campaign. I’m telling you this is because today, I’d like to talk about our process in developing the Wargroove: Double Trouble campaign and how we ended up where we are. 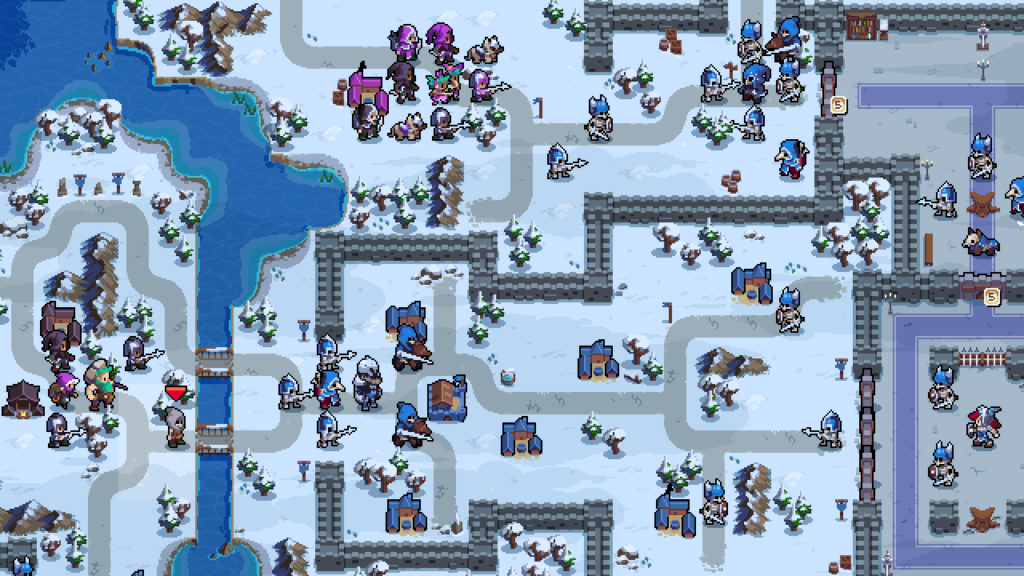 When we were first discussing what form we’d like our downloadable content to take, it quickly became clear that a lot of us were interested in expanding on the Outlaw faction. After all, they show up a bunch in the original campaign, were pretty tough despite the lack of leadership, and managed to be quite charming even while performing heinous acts. Developing them further just made sense to us.

Our art team spent a considerable amount of time creating and pitching character concepts for these new Outlaw Commanders. We looked at which ones we liked most, figured out what their social dynamics with one another would be, what kind of abilities they might use, and so on.

Eventually, the idea was posed of having a campaign where you play as the Outlaws as they rob the kingdoms of Aurania in grand heists. This idea sparked a lot of excitement among the team! Given that one of the most requested features at the time was for more co-op functionality and content; taking that heist campaign concept and designing it for co-op play seemed like a great fit.

Initially I felt pretty confident with a lot of ideas that I wanted to try in order to tie into the heist theme; especially since we’d conceptualised our new thief and rifleman units, which seemed ripe for setting up stealthy scenarios. As an example, I was imagining a mission where one player was responsible for using riflemen to provide sightlines on guards in the fog of war, while the other player had to use thieves to slip around them and steal enough money for the pair of players to start recruiting more powerful units to fight them directly. Unfortunately in practice these ideas had a number of problems.

First, our systems were not designed to accommodate this concept of avoiding enemy sightlines; I didn’t really have a good way of communicating to the player where it was safe to move, or where best to position units for optimal sightlines without giving the player the solution outright. Then there was the issue of the sheer amount of turns spent sneaking around, slowing down the overall pace of an already fairly slow game. Most crucially, the missions I’d been trying to develop were just not proving all that fun to play. As much as I wanted to make the thief unit a driving force of the campaign, in practice it simply wasn’t the right direction and it wasn’t playing to our game’s strengths. 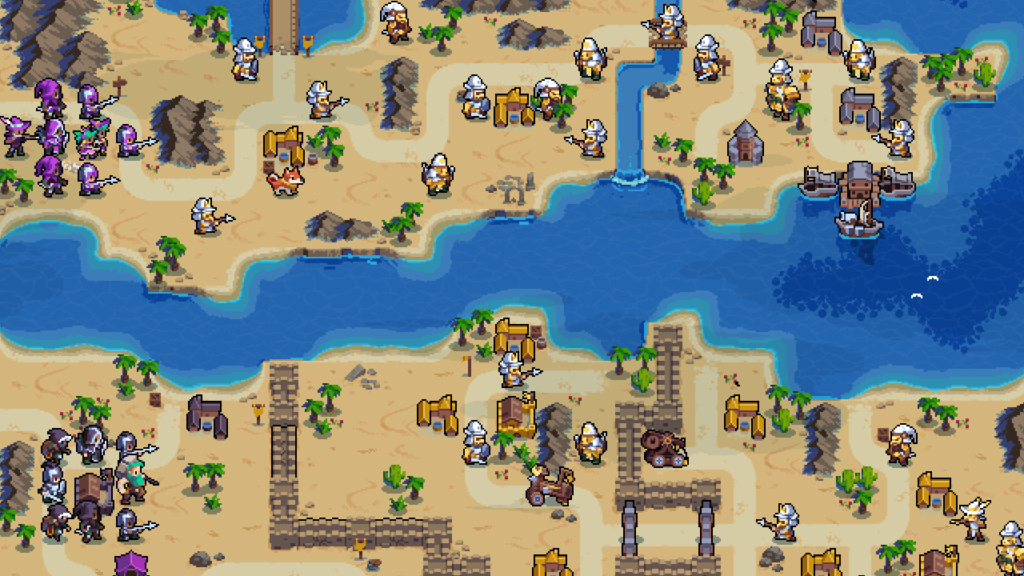 I had also learnt very quickly that designing for co-op posed many of its own challenges. We wanted the players to feel a sense of collaboration, occasionally having to rely on one another to get through a situation. Initially I’d been having the Commanders starting together in one place, usually recruiting from the same general areas of the map, but this more often than not resulted in the players just grouping up and focusing on one objective at a time, which ran counter to the goal of the players working toward their own objectives in order to beat the mission.

So I went back to the drawing board and got help from the rest of the team to brainstorm some new ideas that could still tap into the spirit of a heist, without relying on the elements of stealth commonly associated with it. We managed to come up with a bunch that would mix up the roles that each player served, with an emphasis on interesting combat scenarios that were preventing players from getting to the treasure, and then having to escape after they’d snatched it. It didn’t take long before these new designs started to bear fruit.

Interestingly, in scenarios where the players’ units were limited, we found that people were enjoying these missions much more when each isolated group had a mixture of units belonging to both players, so they had to plan around each other’s optimal moves. For instance; one player could position a Spearman to let their ally take advantage of the Spearman critical hit condition. Similarly, giving each commander’s party a Mage belonging to their ally meant healing that group became the ally’s responsibility, so they could play a crucial role in each other’s survival at clutch moments. Little things like this went a long way to encouraging active communication and collaboration between the players.

All in all, I’m really happy with how this campaign has come together! Each mission has a variety of distinct objectives, fun events and interactions, and I think we’ve succeeded in building a challenging set of missions that reward player collaboration. The Double Trouble campaign is ten missions long, roughly one third the length of the original story campaign, but I feel like the lessons I learned from that first effort have allowed me to make this co-op campaign one of my most polished efforts. The talented artists and writer who came together to craft the story driving it have done an incredible job and I can’t wait for you guys to experience the whole thing for yourselves. 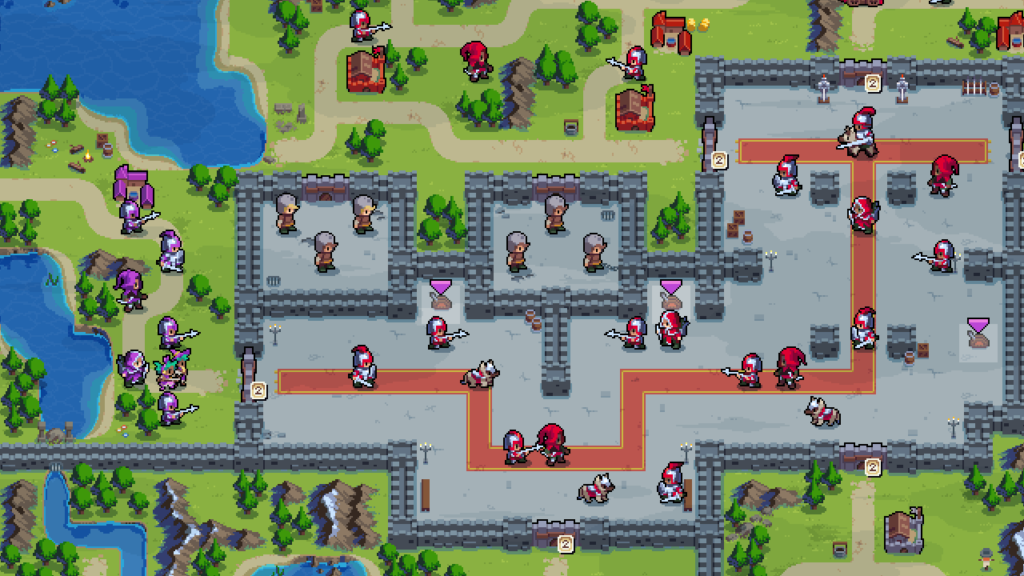 As a final aside, some of our community have been wondering how this co-op campaign is playable on your own, and I thought it would be good to clarify. If you play Double Trouble on your own, you simply play out both Commanders turns yourself. It can take a little getting used to, but it’s just as playable and still feels distinctly different from playing the single player campaign. As it turned out, being able to play this campaign alone at all is one of the unique benefits of Wargroove being a turn-based game. We still recommend playing it with a friend if you can, but you won’t be getting an inferior version of the campaign if you don’t.

I hope you guys found this stuff interesting! It was a lot of fun to work on and I’ll be very interested to see what everybody thinks of the campaign when Wargroove: Double Trouble finally launches on February 6th!