Welcome to this week’s episode of How It’s Made! Today we will find out exactly what the inside of a bowling ball looks like!
See below to discover–

–I’ve just been informed that I’m not ‘qualified’ to talk in detail about the intricacies of bowling ball fabrication. So I’m going to talk about the writing process for Double Trouble instead. I guess.

I’ll start at the beginning. The seed of the idea for Double Trouble was this: Everybody loves a villain. We had hugely enjoyed developing the Outlaws for Caesar’s side missions in the original campaign. The lawless, pontification-prone bandits had been a pleasure to write. So when it came time to explore Aurania through fresh eyes and from a new perspective, these Outlaws, the antitheses of Aurania’s heroic band of royals and rulers, were our first choice.

We had a good deal of fun trying to discover what motivates the denizens of this semi-nomadic, highly anarchic society. We talked a lot about what kind of people they were and what they wanted from life. We went deep. Have you ever read an academic paper about the social and judicial practices of 17th century pirates? Because I have. Ultimately, all that research, thought and discussion payed off, because we managed to come up with some of the most engaging Wargroove characters yet to act as our new protagonists. I’m talking of course about the highly esteemed Wulfar, and his cute-as-all-get-out kids. 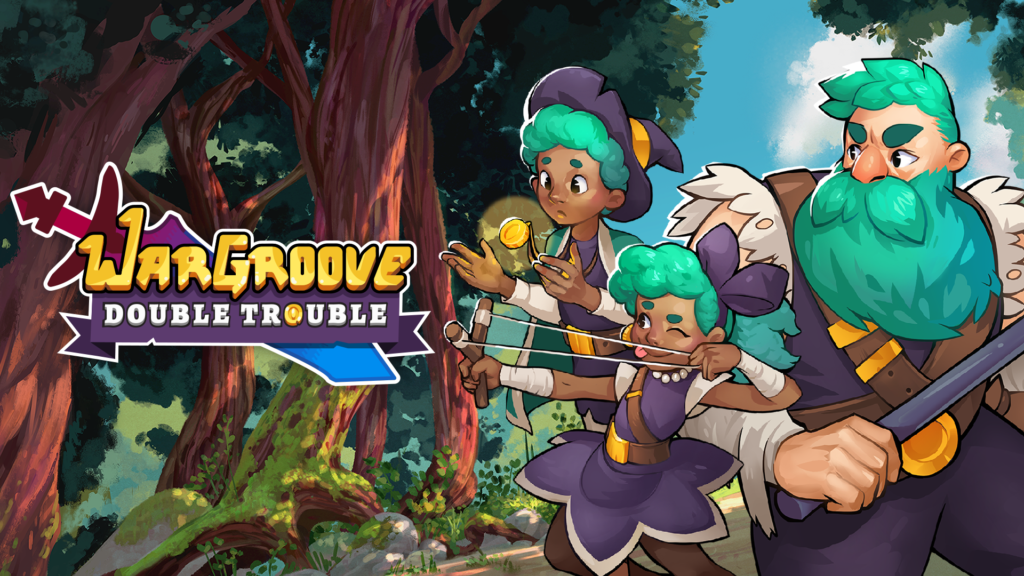 These characters helped us establish the basic essence of the Double Trouble narrative: while the twins’ mother is away the weans are coming to work with dad! And by ‘coming to work’, we mean engaging in an international crime-spree. So we’d established that our story would take us across Aurania by means of a variety of daring heists and close-run getaways. But while there’s a lot of conflict inherent in grand larceny, that alone didn’t feel enough to drive the arc of our story. We knew that even anti-heroes need a foil – a villain amongst villains. Enter Vesper: the theatrically cruel and vindictively spiteful fumomancer. The arch-villain we sincerely hope you love to hate.

So Vesper became the driving force behind this pan-national criminal caper. Ensuring that this story, like the original Wargoove campaign, begins and ends with a villain. A character with a twisted core, heavy and hidden, obscured beneath a flashy exterior… Which, now I think about it, is a pretty good way to describe a bowling ball.

← Building a campaign for trouble, and making it double!
Wargroove’s 1st Anniversary! →